Identify and treat Myxosporea in Koi 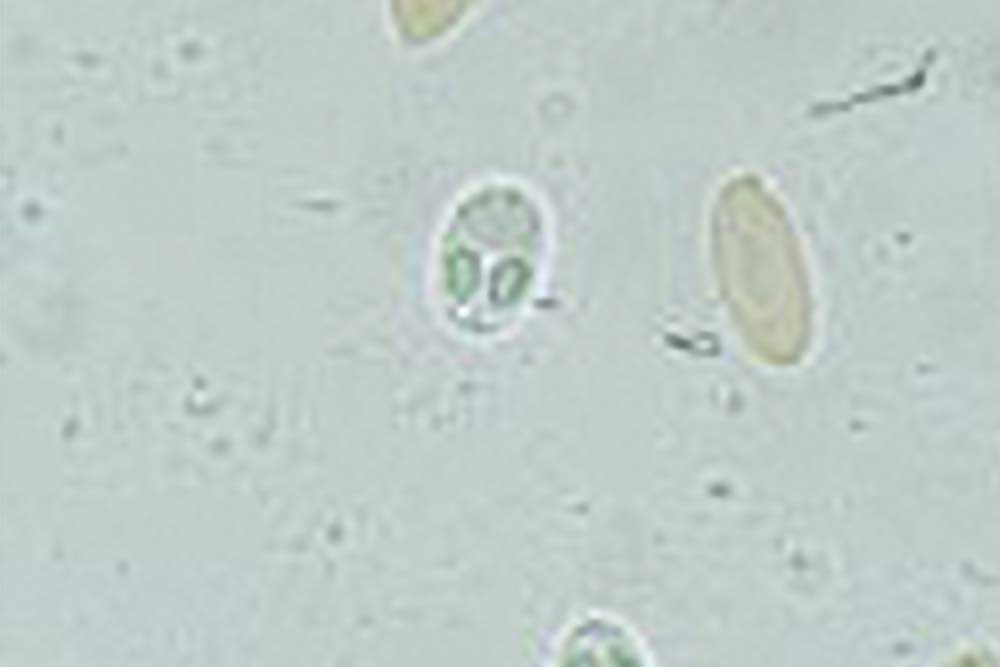 Myxosporea is a rare and tiny parasite that in high quantities can pose a real threat to Koi. Chris Williams shares how to spot and treat the little blighters.

Myxosporea are among the smallest parasites which affect your Koi, measuring as little as 5µm (five-thousandths of a millimetre). Myxosporea are a group of parasites classed as protozoa: tiny single-celled organisms. However, their behaviour, impact and appearance are quite different from their more common relatives, whitespot and Trichodina. Myxosporean infestations are rare in Koi ponds, and only in severe cases do numerous fish become threatened. Although rare and tiny, heavily infected Koi can die from a myxosporean infestation.

Myxosporea are obligate endoparasites, meaning they must live within another organism to survive. Within the host, myxosporea develop in large masses forming cysts that can cause substantial pathology to affected areas. They can be found in a variety of places, including the Koi’s skin, fins, spinal column, swim-bladder and internal organs. However, some of the most pathogenic myxosporea are those found in the gills. The two most important species are Myxobolus koi and Sphaerostoma molnari. Both of these species have proved fatal to Koi under the right conditions.

The occasional occurrence of one or two parasites on Koi should not cause concern or sudden attempts to treat and eradicate. Your Koi may host low levels without you knowing. But fish heavily infected may show signs of distress and require more attention. The gills of Koi are delicate and sensitive and can easily be damaged by poor handling, water quality, or parasite invasion. Heavy infections of myxosporea can cause a condition known as hyperplasia, leading to clumping of gill filaments making oxygen uptake difficult. In severe cases gills may start to disintegrate and die, leading to severe respiratory problems and even death through respiratory failure. When heavily infected, Koi often show rapid gill movement, sluggish behaviour and respiratory distress: hanging near the water surface or close to water inlets.

Gills are delicate, so take care when examining them for suspected abnormalities, and only do so after all other possibilities, such as water quality, have been ruled out. Gill myxosporea can be hard to sample from live fish as they grow within the gill. Although a look under the gill cover of an anaesthetised fish may reveal the characteristics of an infection, detailed examinations, including a gill biopsy, may be necessary to confirm the disease and should only be attempted by a qualified fish health expert.

Despite the tiny size of myxosporeans, they usually develop in large characteristic masses that often make them visible to the naked eye. Each mass, or cyst, may contain thousands of parasites. These cysts vary greatly in size and shape depending on the species, but invariably appear as either spherical or slightly elongated white nodules of about 1 – 2mm on the gill filaments. Although the presence of white cysts may indicate a myxosporean infection, microscopic examination is required to accurately identify parasites.

Viewing individual parasites under the microscope requires at least 400x magnification. To confirm a parasite’s true identity 1,000x magnification is required, as well as a guide to the 1,400 species that exist.

Take me to your leader

Each parasite within a cyst appears round or oval, motionless, with no obvious appendages. Internally they possess two tiny spores that appear as a pair of eyes within an alien-like head. As myxosporea are endoparasites, living within tissue and organs, they are protected from chemical treatments used successfully for other protozoan parasitic infections. Myxosporean spores are extremely resistant and even withstand freezing. There are no over-the-counter treatments, although a number of drugs given under veterinary supervision have proved successful for certain parasite species. All such drugs are administered orally to reach the parasites within the tissues. In the case of such a disease, a recognised fish health expert or vet should be able to help.


Obligate parasites: can only survive if they have another organism to infect, such as a fish.
Endoparasites: Are parasites that live within the fish, rather than an ectoparasite that lives on it. Endoparasites may live just under the skin or deep within the internal organs.
Pathogenic: Means damage caused to the tissues and organs.
Spores: Are the infective stage of an organism.
Biopsy: A very delicate procedure involving the removal of live tissue for examination.

>Take great care when introducing new fish into your pond to check that they are healthy, and are showing absolutely no signs of respiratory distress.
>The gills of your Koi are very sensitive. Always take great care when carrying out a gill examination and seek expert advice if you are not confident or experienced.
>If your Koi appear to be in distress and show symptoms that may indicate a gill problem, for example gasping, always check water quality first. Carrying out a simple task such as increasing oxygen will always prove more successful and less stressful than netting and handling your Koi.