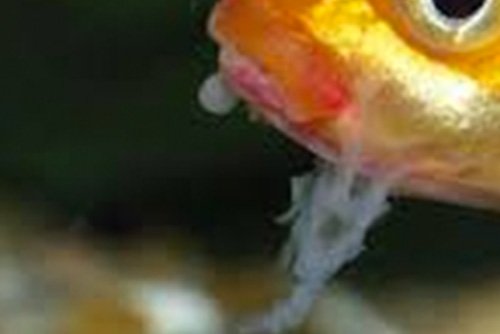 Fungal disease can be caused in a pond by a number of fungi that occur naturally in most waters, for example, the fungus saprolegnia.

These fungi are no problem for the healthy koi in a well-maintained pond. In fact, they help maintain a balanced ecosystem because they feed on decaying matter. These fungi only attack damaged areas of skin or rotting waste.

Fungal disease is therefore a secondary infection because it requires a koi that has already been affected, for example by a parasite. Only then does the fungus attack the weakened area on the skin, fins, or beak. Mold also attacks dead eggs; during spawning, it is, therefore, important to remove any eggs contaminated with fungus.

The egg first turns white, after which a kind of fur grows around it. If these infected eggs are not removed, the fungus can spread to the neighbor eggs. Contaminated eggs can be easily removed with a pipette.

Fungal infections are easily visible to the naked eye because the infected areas are covered with white tufts. Sometimes these resemble water, although they are not always white. Instead, they can look brown, black, or gray. In the early stages, a fungal infection is not always noticed without removing the koi from the pond and examining the suspicious areas.

Initially, only one or two small strands are seen but these grow over time to form the cotton-like tufts typical of a fungal infection. It is important to spot fungal infections early, as this both makes the infection relatively easy to remove and greatly reduces the chance of death from the fungal attack.

In severe fungal infections, if large areas of the body are covered with cotton-like fur, the chances of survival are drastically reduced, as the fungus starts attacking the koi from the inside. This leads to irreparable damage to the internal organs. Be aware that there is a condition, rotten, that looks like a fungal infection. In fact, this is not caused by a fungus, but by the bacteriaFlavobacterium columnare. This disease must therefore be treated differently.

Before you start treating fungus, you need to identify what could cause the fungus to be a problem and address that problem first. If you don’t, you will be fighting a losing battle in your attempt to get rid of the fungus. There are several anti-fungal remedies that you can use in a bath or pond with varying degrees of success.

The best approach for fungal infections is a topical treatment of each koi individually. If you are only dealing with a minor infection, this can happen in the pond. However, in severe cases, where large areas of the koi are covered with mold, it is preferable to treat the koi in a quarantine tank.

This allows you to minimize the number of fungal spores that end up in the water. Local treatment. should be applied to areas affected by fungus. This will be easier if the koi is stunned first. Another option is to hold the koi during the treatment. Before topical treatment, the fungus must first be removed with a cotton swab.

Then malachite green is applied to the spot, after which the entire area is sprayed with propolis. The treated koi can then be returned to the pond. If, after removing the fungus, it appears that a bacterial infection has occurred and therefore large areas of sores are visible, additional measures may be necessary.

You should discuss this with a koi specialist. Mold attacks dead eggs,